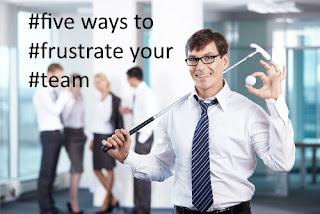 Have you ever been part of a team, where during the course of a team event you found yourself frustrated - but not exactly sure why? I recently played the role of a frustrated team member while trying to enjoy a weekend round of golf. My “fun” experience ended up in hurt feelings, thrown clubs, and me sitting down to write a lengthy complaint letter.

Upon reflection on my Saturday round, the biggest question in my mind was; “What had transpired to get the whole team upset and frustrated doing a ‘Fun’ activity”?

I personally did not like feeling frustrated and felt bad for my team members; so on the next day I spent hours writing a complaint letter to the Courses General Manager (GM). While composing my thoughts and after finally speaking to the GM on the following Monday, I was confident I had figured out what caused my teams frustrations and triggered our reactions - it had to do with leadership and managing teams.

First a little background. On one long weekend earlier this year some friends decided to spend our Saturday morning golfing. To maximize our day we scheduled a 6:50 AM tee time. On the day of the tee time, three of the members of the foursome arrived early, the fourth alerted us earlier that morning that he would not be able to make it - we informed the course at the time of sign-in.

Lesson 1: If you change assumptions that impact the team you need to communicate and get buy-in from the whole team. Teams need adequate preparation to ensure they have a solid start.

At 6:40 AM the team was on the first tee warming up, swinging, getting tees, and ball markers ready. Since our fourth had cancelled the course was able to quickly filled the vacant spot with a single golfer. After being introduced to the course provided fourth member it became obvious to me that this gentlemen had a very good relationship with the starting Marshal – this was most evident by seeing them spend five minutes chatting. At the time I thought nothing of it, I only noted the interaction. Our starting Marshal insisted that our foursome wait for the group ahead to get off the green. Interestingly enough our Marshall had us wait until 6:55 AM before we started out.

Golf Marshals are much like golf course police officers - when a Marshal approaches the pulse rises.

After a few holes into the round, I knew we weren’t going as fast as we could. But at the same time there was no one in back of our group – the law-abiding Marshals are usually pretty quick to investigate slow play. My slow play feeling was confirmed by hole 3. On this hole we started seeing multiple marshals, they would come and go throughout the rest of the round. A Marshal would ride up to his buddy(our fourth member) chat then move on. Marshals didn’t just approach the fourth member. In other instances a Marshal would ride up to another team member - say something then move on. The Marshal said things on various occasions to team member 1, member 2 and member 3. After the marshal addressed an individual and left, the team congregated and transferred the Marshals message to the whole team (for a good minute or two). - This was mistake 2.

Lesson 2: When you have a team (that must complete milestones together), you must communicate to the team as a whole. Communicating to one team member and expecting them to relay the message can; show favoritism, dilute the message, or perhaps the message communicated will be incorrect, or not communicated at all.

Further into the round it became clear to me that the course had heavily invested in golf Marshals (after all it was a three day weekend). With the added Marshals my teams dynamic changed, other team members in my foursome verbally expressed their distain with the Marshals. The team was frustrated and I too was frustrated. The favored fourth player and I decided that we would try to help improve pace of play. So, from holes 11 through 13 we convinced the team to move from blues to the combos (a shorter course plays faster) - we then announced ready golf. I so wanted to improve play that I rushed putts and left greens before everyone had putted out –, leaving a player putting on the green is rather discourteous to the golfers on our team but I felt it was the right thing to do given our situation.

I was a champion for the course and so excited with my progress. I wanted to demonstrate with my actions - "look at me Mr. Marshal, I’m a team player – I’m here to help".

I vividly recall sprinting to the 14th tee and quickly teeing off as the rest of my group approached the tee box. Excited by my big drive in the center of the fairway I saw the Marshal swerve off the path and drive down the fairway to me. I figured he was going to give me praise – little did I know that what he would say would be the proverbial straw that broke the poor camels back. The straw that helped me contemplates what it truly means to lead a team.

The Marshal pulled up beside me.
I gave a big smile to the Marshal and noted his name tag which read, "Dick"
I said: “Hi Dick, How are you”?

The Marshal grimaced and looked at me, then said;
“You know, you’re the reason the pace of play is slow today, if you’d just reduce your practice swings you guys would be much faster.” - This was mistake #3.

Lesson #3: Don’t judge a team’s performance by taking in one data point and making an assumption, if you reprimand the wrong person you might break one of your champions.

After the comment on hole #14 I was completely discouraged. At hole 15 when one team member saw a Marshal sitting on the green watching as we approached, he proceeded to throw about four clubs, one at a time from his position on the green to the first cut.

I said to my teammate; “Are you OK? I’ve never seen you throw a club.”

My teammate said to me; “Well I hope the Marshal sees that I’m upset”.

Lesson #4: When you are measuring a team’s performance you must provide the team a means to measure success, and give them ways to self regulate. This should be quantitative, easy to measure and visible.

When I got home late in the morning I still felt frustrated, when I woke up on Sunday I knew I could not let this go. So I sat down and wrote my essay to the GM and emailed it off to him. I was meticulous in providing my shot-by-shot analysis(including my score) and clubs hit. I wanted vindication after being labeled and called out by the Marshal.

After I emailed my essay to the GM, it didn’t take long for him to call me personally, I spent about 35 minutes discussing the situation. During our conversation, I told the GM that while I realize the team didn’t play as fast as they could, we still finished in 4hrs and 13 Minutes. The GM said to me; “Oh, 4:15 is the pace of play for later in the day, however we expect players in the morning to play in less than 4 Hours.” - Mistake #5

Recently, I shared my story with an organizational consultant, after I finished telling my story – he laughed and said I’m not surprised you felt that way. The consultant said that he has a workshop exercise where he puts teams through a simulated situation where goals are vague, this creates tension similar to what I had experienced.

With the group in place he gives the first person (with their back to person 2) specific instructions, and without the first person turning around or saying anything the second person must ensure the team meets the objectives. I won’t give away the answer but he told me that only one team member in this exercise feels good about the exercise, the rest get visibly upset.

My golf day reminded me that when managing a team you must set proper expectations, not show favoritism, communicate to the whole team, give the team tools to measure, and understand each player’s contribution. I’ve accepted my reaction to the situation and feel that I was justified in feeling the way I did – my only regret is that I wish I had taken some steps earlier in the round to get the team together. I’ve decided to use these lessons learned to help me not only on the golf course but also in dealing with other teams.

Situations like this can have a serious impact on customer satisfaction and your team’s morale. In my situation, even though the GM promised me a free round of golf I decided that after that poor experience I had no intention of going back any time soon. And while this is my immediate reaction, to avoid the situation, the better thing to do is to get back there and see if my feedback was taken seriously, implemented, and see if there is improvement.

I’d be curious to get your stories of situations where you felt frustrated by a team effort, and perhaps we can examine why you felt the way you did, and perhaps figure out what could have been done to provide a better team experience.
Posted by John M. Hawkins at 8:16:00 AM