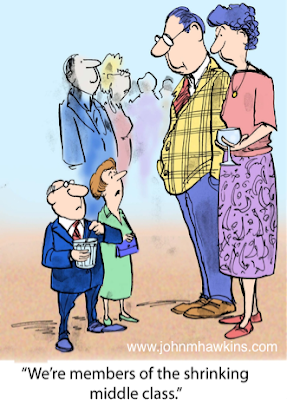 The middle-class had been the ‘bell’ in the social-class bell-curve for years, for many Americans the coveted middle-class is what the American dream is all about. As a middle-class member, this means that you are relatively financially comfortable, you can see how far you’ve come and through hard work can aspire to accomplish more and hopefully get to a top upper-class spot.

Paycheck to Paycheck
While many take top spots, the data shows that more and more people are living paycheck to paycheck – meaning they are further away from the American dream. According to Market Watch, “63% are unable to handle a $500 emergency (MarketWatch).” Others indicate they will change their spending to pay for an emergency “23%, reported they would pay for an emergency by reducing spending on other things (BankRateSurvey).” The rest must borrow to cover a $500 emergency expense.

76% of The Population Studied
The ability to pay for an emergency isn’t the only indicator of a declining middle class - according to a Pew research study, “from 2000 to 2014 the share of adults living in middle-income households fell in 203 of the 229 U.S. metropolitan [statistical] areas (PewSocialTrends_2016).” This study is significant because it included data from 76% of the 2014 national population, a large percent of the population, which means that we should take a serious look at this data.

If you take a balloon and put pressure on the middle the force from the pressure will displace the mass to one end or the other, in this case, the mass is shifted to both lower and upper classes – meaning that people's income is moving from the middle of the ‘bell curve’ to either end – resulting in fewer middle-class spots.

Why Should You Care?
This shift is significant because now there are fewer rungs and a greater distance between the fewer ladder rungs – just like with a ladder or staircase – the further the distance between steps the harder it is to get from one step to another. The middle class plays an important function and acts as a buffer between the two ends of the spectrum; on one end we have ‘the-haves’ and the other ‘the-have-nots.’ A lower class person can see themselves getting to a middle-class spot, but moving from a lower class to upper class is a quantum leap.

Your Choices;
Choice A) = Do nothing
Given the declining middle class, it’s not ok to assume that if you do nothing, you will get to keep your current social status. Some forces could push you lower on the social-class ranking.

Choice B) = Do something:
If you choose to do something then here are five steps to find out where you are on the social-class ladder, and also give you some ideas on how to build a plan to help you maintain your status and perhaps move to the next class.


There is no doubt that there are fewer and fewer middle-class members and more and more people who are now not able to handle a relatively small financial emergency. Regardless of where you are currently in your life, it wouldn’t take much to move you off your plan. Those who want to preserve their place in the social-class system should be planning now to understand where they are currently, then develop a plan to either maintain their status or grow above and beyond.

If you need some guidance consider reaching out to a mentor or find a coach who can help you see a different perspective and maybe help you find happiness – with the assistance you too can change the trend and maintain your spot or grow into a higher ranking.

John M. Hawkins is a Vice President of Marketing and Communications, a technologist and the Author of ‘Building a Strategic Plan for your Life and Business” Author goo.gl/X3pN75. You can find him on twitter www.twitter.com/hawkinsjohn
Posted by John M. Hawkins at 7:00:00 PM